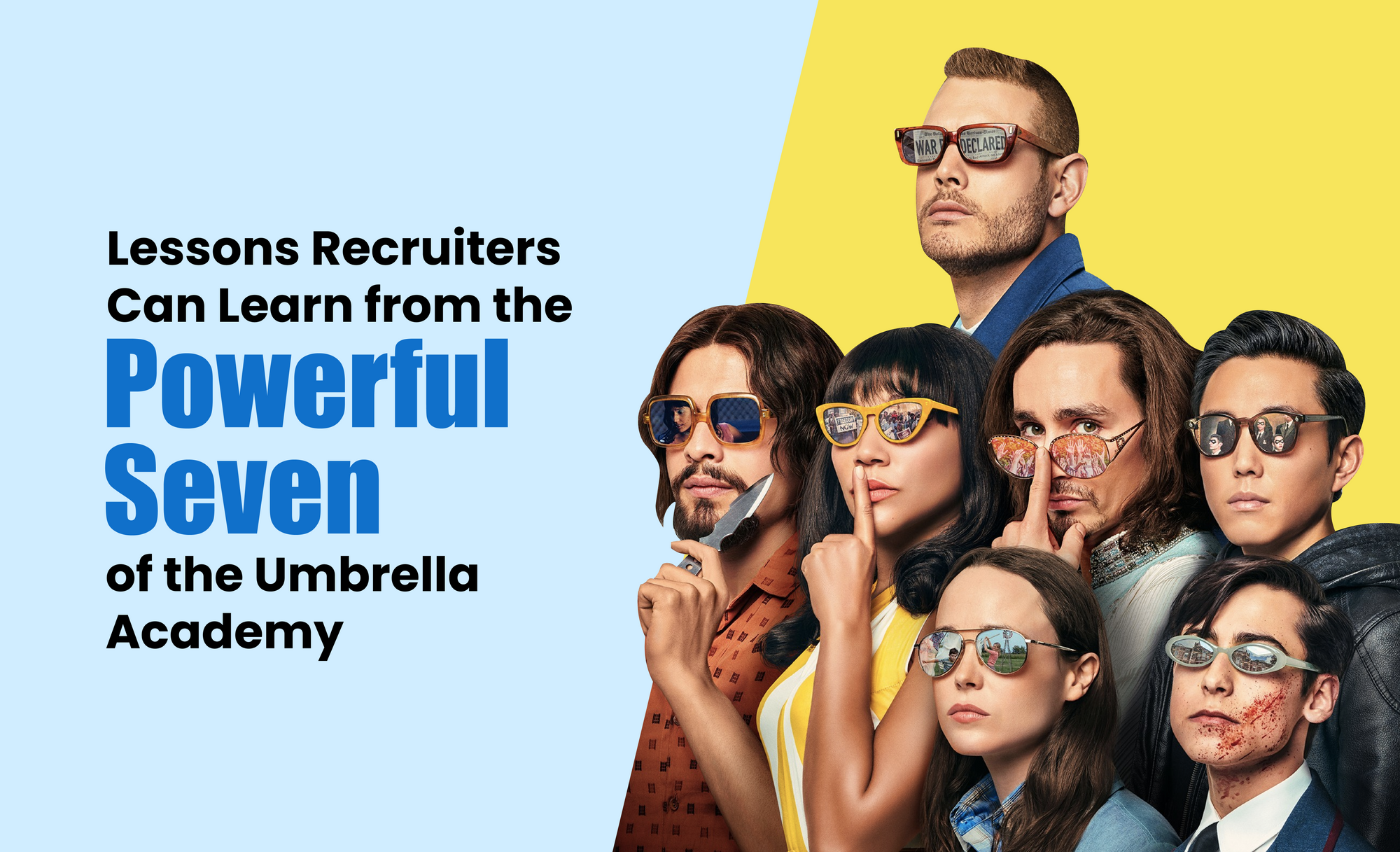 The Umbrella Academy has attracted the attention of so many people because of the variety of themes it covers.

It's not your traditional superhero plot, nor is it a collection of eye candy assembled to form a power ensemble cast (though, to be honest, we have to give it that).

The show is streaming its 3rd season on Netflix today.

So we took this excellent opportunity to compile a list of noteworthy lessons recruiters can take away from each of the seven siblings of this beautifully constructed series.

Each character in this series is brilliantly constructed, giving us the opportunity to take away something from each of them.

Let’s discuss what the Hargreeves siblings and their experiences can teach recruiters.

1. You Deserve a Moment of Peace - Luther (aka Number One)

Sometimes everything seems a bit too much, especially if you're recruiting from home.

You have a ton of responsibilities and working from home means you're also dealing with family drama while trying to meet critical deadlines.

Take a step back, and breathe.

The world was ending, and the pressure of it all felt too much to handle. So he chose to take a moment to give up all the care in the world.

At the end of the day, he cares about it, of course, but he realizes that the stress will only hinder his abilities and that taking a breather is necessary.

It is important to remember that if you're not doing well, you won't be able to deliver your best. An exhausted mind can cause you to miss red flags in a candidate and hire a poor employee for your client.

Keep time for some much-needed self-care in your calendar. You deserve it :)

2. A Bit of Compassion is a Must - Diego (aka Number Two)

Initially, Diego was portrayed to be a fighter, all rough and grumpy. But as the show progressed, a softer, and more compassionate side of him is revealed.

In one such episode, Diego soothes Lila's anxiety about the future with a story about yogurt. He explains that just because something isn't understood doesn't mean it's not real.

It’s high time recruiters bring out the human element in recruitment too. After all, it's not just you who prepares for the interview; candidates also put in a lot of time to prepare.

They are also nervous and jittery about how they'll perform. Hence, a little bit of understanding and comfort from your end can really help calm them down and give their best.

Calm and comfortable candidates are able to be themselves and not hesitate to open up. This leads to an honest and candid evaluation of the applicant.

Read more: 6 exclusive recruitment lessons you can take away from Netflix's Stranger Things.

Having trust issues can pay off in recruitment. If you believe everything that's on their resume is true, you might regret it later.

It is crucial to conduct thorough reference checks to validate your candidate's credentials.

You should be wary of what your candidate has written in their resume, and if you have a gut feeling that something’s off, don't just dismiss it.

Just like when Allison was suspicious of those people dressed as vacuum salesmen knocking on their door, she didn't ignore it.

As it turns out, those people were not there to sell vacuums after all!

4. Must Not Dwell on the Past - Klaus (aka Number Four)

Even though Klaus is a rebel who enjoys a hedonistic lifestyle, he is also incredibly sensible. He is proven to have more insight than assumed and to be a voice of reason in the face of his family's rash decisions.

He also appears to have a more positive, healthy outlook on their childhood. He accepts they had a traumatic childhood and moves on without dwelling on it too much.

Letdowns are inevitable in all careers. Klaus teaches recruiters to be rational and not dwell on their past mistakes

Your poor hires and client losses from the past should stay there. It's essential to learn what you did wrong and move on to do better.

Your current clients need you to be present and give your best to find the most suitable employees for their companies.

Number Five's determination to save the world from the apocalypse is one of the series' most riveting, nail-biting story arcs.

He employs all his might and creativity to obtain the answers he seeks, seemingly unconcerned about the consequences.

While some of his actions may be problematic, such personalities with a great purpose and an enthusiastic spirit are honestly admired since they teach us a lot: the calculating methods, the opposition to inactivity, and thorough planning.

It took Number Five nearly a lifetime to prepare for the inevitable apocalypse, and we know that he could not have obtained such wisdom if he had been a "happy-go-lucky, go-with-the-flow, live-by-the-paycheck" type of guy.

Purpose, direction, a strategy, and a strong spirit are more important than following trends and trying to “look cool” doing it.

Recruiters must also clearly define the objectives of recruitment before starting the process. A thorough understanding of these goals and a detailed recruitment strategy to achieve them is also critical.

Good thing Number Five manages to appear so sleek despite having literally years behind him while being sought after by The Commission for his tremendous brilliance and talents (also managing to be legendary and notorious - honestly, what can this guy not do?)

Ben Hargreeves is the sweet, caring, and innocent one of the Hargreeves siblings. He's always loyal to all of them.

Even after his death, he stays with his brother Klaus to watch over and supervise him because Klaus always acts very volatile and often hurts himself.

In the series, we can see that Ben cares deeply for Klaus, just like he does for his other siblings, always looking out for everyone.

This is how all recruiters in a recruitment agency should function; helping and looking out for one another.

A recruiter's job can get extremely overwhelming, and with a bit of support and assistance from their team, they can complete tasks with great precision.

Stick by your team's side and work your way to success!

7. Have Faith in Yourself - Vanya (aka Number Seven)

After many failed attempts at trying to discover what her power is, Vanya decides to give up.

She continues to live like that for years, only to later discover that she has superpowers, after all, and ones stronger than the rest.

If she had continued to try, she could have realized her powers early on.

After all the Hargreeves siblings find out about Vanya's powers, none of them believe that she can control them.

For a while, even she doesn't believe she can because she lets their opinions affect her. Well, it turns out she can.

As cheesy as it might sound, believe in yourself.

Even if your last client didn't work out or your candidates ended up ghosting you, continue to have faith in yourself.

There are ups and downs in every career and potentially every industry. The crucial thing to do is to see where things went wrong and streamline the process.

Each of these seven characters is power-packed with personality, giving us so much to learn.

Even after being the most dysfunctional family in the world, the Umbrella Academy siblings manage to dismiss their differences and troubles to work together for a bigger, better cause (saving the world!).

Just like that, we suggest you stick by your team and clients, let go of small differences, and work collectively and cooperatively towards the bigger goal; finding awesome candidates!

Did we miss any takeaways from the show? Let us know in the comments.

Read more: What traits did your worst hire have? We've compiled 10 craziest Reddit answers to our questions.